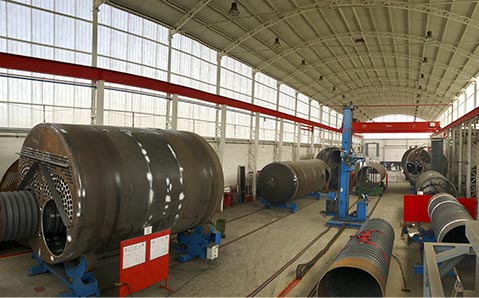 A summer at full capacity

This summer our workshop is running at full capacity.

In addition to several deliveries of medium-sized boilers which require major engineering but less time in the workshop, we are now working on the manufacture of another large project involving Auxiliary Boilers for a thermal electrical power plant to be commissioned in Greece.

This project consists of four twin-furnace boilers, with production per boiler of 35,000 kg/h (140,000 kg/h in total), and includes thermal superheaters, economisers, four 30 m stacks, a common thermal deaerator, a control board with automated device per boiler, purge tanks, as well as a system for chemical dosing and continuous sampling.

We are currently pre-testing for the hydraulic test in Boiler 1, after which the gas boxes will be added to carry out the final, official test.

The pipes are now being introduced in Boiler 2. Boiler 3 is in the stage of internal welding and installing the furnace, while Boiler 4 is at the start of the assembly process.

We are also working on the manufacture of superheaters, economisers and the deaerator.

Delivery is envisaged for October; we will publish photos of the project once it is complete.